The pressure was on. The Awakening had a fantastic cover. I loved the nebula and the arachnid-like space station. Then came the incredible visualization of the asteroid base for Retribution’s cover. After two amazing starts, I fretted about how to keep the trend going–even topping the previous ones!

What to put on the third cover? It had to be visually striking, invoke an emotion. I thought about the core story of the third book, and the tension slowly building over the course of the trilogy. Inspiration struck! It was obvious. I had to show the Nukari armada.  I smiled as a vision appeared in my mind. 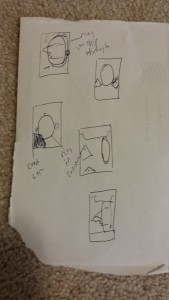 I scrawled down the image on a scrap of envelope paper.  Now, for those that have not read the third book yet, this is NOT a spoiler for the following reasons: 1) their armada has been threatening since the first book, 2) the back cover tells you the armada comes out swinging, 3) the prolog at the beginning of the book talks about the armada and a gateway being built.  I won’t provide any spoilers or additional information about the scene than what I just mentioned.

Now, beyond the general descriptions of Nukari ships, no rendered versions of their vessels existed!  If I wanted to display them, we needed a design. Then there was the gate. There were aspects mentioned in the book, but nothing out-rightly specific about the visuals. It’s always fun to provide enough information to let the reader visualize their version in their mind. But, if I wanted that on the cover too, it would also need to be visually concepted.

So began the design for Nukari ships. I wanted them to be aggressive, dangerous looking, and capable. They needed to look like they could take a pounding, and deal great damage.  I made a quick list of the things that instilled fear people, as its the effect the Nukari would want their ships to have on opponents.  I looked to our “lizard brains” for stimuli there…  There’s 6 questions your lizard brain asks of every pieces of stimulus throughout the day: 1) can I eat it, 2) can it eat me, 3) can I kill it, 4) can it kill me, 5) can I have sex with it, 6) can it have sex with me (perhaps unwanted).

A few obvious criteria jump out: can it kill me, can I kill it, can it eat me.  Then I went to nature, what types of nature’s gifts create natural offenses/defenses for animals? Skin texture, natural body covering (scales, shells), body coloring, claws, teeth, a solid body structure, muscular composition, body size, and distance based defenses.  I then performed an animal image search on Google looking for various creatures.

After searching various creatures with tusks (boars and mammoths), horns (rhinos), and sleekness (black panther), I came across the Pangolin. 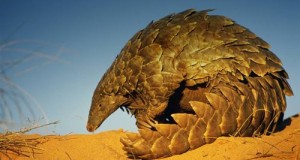 This was the upgraded vision…

I sent the concepts off to my amazing 3D designer, Glenn Clovis, who began to render a number of options.  Some were more industrial, some more organic… Here are two of the many versions he did.  I’m showing these because they’re both officially a part of the D’mok Revival universe and protected assets (thanks to copyrights).  Yes, the ship on the bottom will be used–I’m not tell where, when, or how yet… But I do know.)

I really loved the slick, smooth, almost squid like version (at the bottom).  But it didn’t “feel Nukari” to me.  The overlapping armor layers of the top ones were like the Pangolin, and felt great.  I knew this was the right direction.

He reworked the design based on some feedback.

SO COOL!  Though the initial ship seemed too small.  Perhaps it would make a great fighter, but not the big “Laviathan” ship mentioned. I provided some feedback, and the next evolution appeared. He also started to apply the overlapping armor layers to the gate. 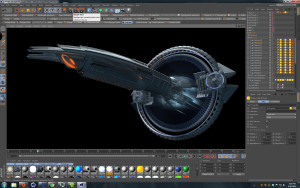 I liked where this was going. It still looked too vulnerable in the middle. I also wanted the front to look like “a deadly face.”  So we swapped the front cannons with longer, tusk-like components.  I also suggested we continue the layers of body armor to the rear of the ship. 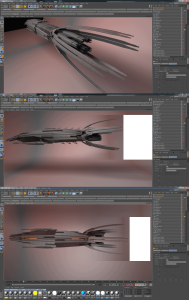 Glenn took that and iterated.  To simply the design, we dropped the side cannons, and added a larger front cannon (inspired by the Bird of Prey from Star Trek).  After review, I thought it was cool, but had him add a second smaller one directly under it (it would have its uses).  We ended up with the following design:

There, now that we had the ship, we could go after the gateway.  I wanted the designs to look related since the Nukari made both the ship and gate technologies.  After a few revisions, the overlapping armor was applied to the design.

Now we had to combine them.  We investigated a few angles (head-on, from the side, from an angle, etc.).  I wanted a dramatic scene.  My very first vision had an extremely closer perspective looking up at a sharp angle. We ended up being a little further back since the up-close view looked a bit distorted.  I wanted people to see the amazing detail of the ship, gate, and future nebula.
Glenn assembled the complete picture.

The nebula was instantly striking (he’s so good). There was some lighting tweaks, and some changing of the effect within the gate. In the end, to provide scale, I thought we could go back to the “fighter” design and add some in.  It would make it look like an armada coming through the gate (Which was the point), and help explain the big ship was — BIG. 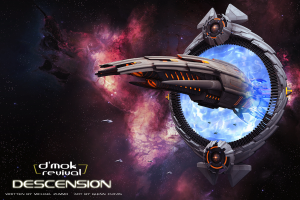 And BOOM!  It’s one of those things where you see it and go, “THIS IS IT!”  I was blown away.  I was thrilled!  We’d done it again. I love collaborating with Glenn.  He’s a visionary, so very talented, and easy to work with (and patient with me).

I hope you enjoy it as much as I do!

Two weeks after I launched D’mok Revival: Retribution I sent the completed third manuscript to my amazing editor Arlene. I knew in order to achieve my December 2014 release I needed to get the manuscript edited, and a new cover design from Glenn by October, so I could print it in November, and have it by my goal.

I promised my fans, so I worked hard!  I’m proud (thrilled) to announce book 3, D’mok Revival: Descension, is on schedule.  In fact, today I’ve updated the dmokrevival.com site to reflect the artwork of the third book.  If you go into the “Extras” section you can download your very over desktop artwork featuring the new cover artwork.

I have to say, working with Glenn has again been a dream. We’re a great team, and I think people will love the new cover. Arlene has pushed hard to keep the final book of the Nukari Invasion Trilogy concise and streamlined.  As a result, I have two entire chapters (over 10,000 words) that have been removed from the main book.

Fear not!  I will release this very important segment as a Web exclusive right here on dmokrevival.com.

I’ve also updated the branding for book 1.  I’m so excited to get the third book in your hands and get your thoughts and feedback!

If you’ve been following the Facebook D’mok Revival page, you’ll also see a hint of another big announcement concerning the D’mok Revival universe coming up. But I won’t tell you now, you have to wait until the launch event for book 3!

As always, thank you for your amazing support!  Please keep the feedback coming!